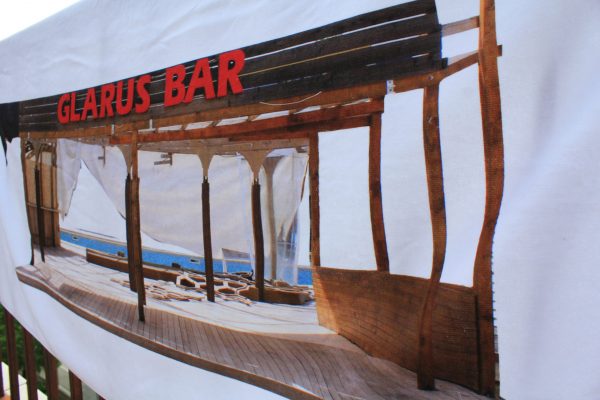 А collection that deals only with the most important things!

During an artistic project, in the special year 2020, Iliyana Kancheva finds herself in the wilderness of the Black Sea beach, out of season. It is this strange quiet mood and the absent usual nightlife for this popular beach between Cocoa Beach and Hotel Kuban, attracts the attention and the lens of Kancheva. The paradox of the place, without the tourist influx, is captured in a total of 12 frames. The original photographs, which captured the effects of the Covid-19 attack and the endangered species of “party beasts”, are collected in the Party Animals series.

In 2021, for the invitation of the online platform 5new.org, Iliyana Kancheva reopened her personal collection of marine photographs and developed 5 of the images especially for the platform, which she turned into 5 independent short stories. Symbols are inscribed in them, which say a lot to the person who is coming from the Bulgarian context and almost nothing to the person outside of it.

The Party Animals collection consists of a set of collage prints on a towel and the original image in the form of a framed photo printed on photo paper. Each of the “summer sets” has a circulation of up to 10 copies.

The series shows what we put in the foreground in today’s world and the price of what. The images in the series capture on a highly sensitive level the sadness of thousands of people who, day after day, take the time to fight for the rights of our fragile nature (with ongoing every now and then annually civic protests for protecting Bulgarian nature from the Bulgarian government and lobbies). Light buildings or high-rise constructions erected on the unstable foundation of golden, soft, fine Black Sea sand are the ugly emblem of this struggle. The failed design, torn nylons and haphazard landscape are in stark contrast to the impressive blue and gold background of the sea. In order to bring out this anti-image, Iliyana Kancheva processes the collection of collected photos by cutting out only those strong, somewhat ugly, somewhat charming, and sometimes absurd examples of the slow and prolonged destruction of our impressive natural resources.

The presentation of the collection is also not accidental. The transfer of the image sealed through the lens on an ordinary white towel, and it is selectively cut and shown, is only the most important opposition to the classical form, in which the work is valuable. Only in the background comes the souvenir, a pale imitation, for mass use, on everyday objects – pencil, notebook, cup… In Party Animals this discourse on value is turned upside down – the repeatedly overexposed image on a household item is the work of high value, and to it as a free addition, as a cheap cross-promotion, the original source of inspiration is provided – the natural landscape. The towel bears the symbols of our occult-uralized Black Sea coast, of the cloned images that scatter the sand for months every year to leave behind a grotesque natural picture. Places like Cocoa Beach and other unexpected buildings and light structures on our sea are already a household name, which for years shows why in this collection the towel with distorted reality is a valuable artifact to the sea set and nature is only an additional free gift.

The possibility to reproduce this concept (although only up to 10 times) is also a great homage to the multiplied image of our Black Sea resorts after the boom of their construction, which in fact do not differ much from each other, but on the contrary, increasingly and uniformly become reserve areas of the highly endangered species of Covid-19 – the party beast.

With best and warm wishes for a pleasant holiday on our Black Sea coast this summer season from the 5new team.